At guide camp I’ve learnt that, if the night has been dry and quiet, sometimes the embers of yesterday’s fire can be re-kindled in the morning. It usually takes a lot of puff, or even vigorous fanning, as will as some dry twigs. On the last, but blessedly dry, morning of last summer’s camp I was first up and could feel warmth in the embers in the fire pit. So I fetched my bag of dry leaves and twigs from the store tent, along with a tray to fan the first tentative flames. As I placed the first twigs on the embers, a curl of smoke rose. I was amazed, but calmly added a few more sticks and soon had a flame, more sticks and then a fire. Then the kettle. 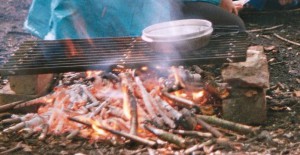 In the right place, at the right time, kindling a fire is an easy thing to do. At other times, as I observed above, it can take a lot of breath and determination. Some days, when the weather is damp it is very difficult, and other days it may prove impossible.

On the morning quoted above I was as thrilled as the young guide the evening before who had lit a fire for the first time (and she’d been to scared to even light a match previously).

I also knew that in a couple of month’s time I’d be attending the ‘Kindlers’ conference at Woodbrooke. This experience made the metaphor of ‘kindling’ was very real to me.

The ‘Kindlers’ are an informal Quaker group working to rekindle the depth and passsion of Quaker worship. Their workshops encourage a greater awareness of what we are doing in worship, increased knowledge as to how to do it (instead of assuming that we’ll all just pick it up as we go along) and a deeper level of sharing than most people are used to. I find that I come away from a workshop enthused to share something of the experience with others. If we all do that then the fire will spread. 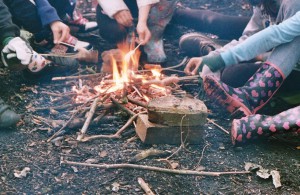 In the process of being a Quaker and a Buddhist, I find myself asking if there is a place for some ‘kindling’ amongst the Buddhists I know, as well as amongst the Quakers.

I sense that there could be, but I’ll remember to breathe mindfully as I blow on the warm embers!

1 thought on “K is for Kindling”