On the day of my wedding, some 30 years ago now, my spouse and I had decided to greet all the guests ourselves, so we were in the lobby of the meeting house as the Meeting for Worship for Solemnisation of Marriage gathered. As the meeting settled down the sense of Presence was tangible out in the lobby. We have never forgotten it, and the certainty of that loving, caring Presence has sustained us through the times of doubt and difficulty that have happened since, as they do in all lives and relationships. I can say with Thomas Ellwood, recalling his own marriage in 1669: ‘We sensibly felt the Lord with us and joining us, the sense whereof remained with us all our lifetime, and was of good service and very comfortable to us on all occasions.’ QF&P 16.02 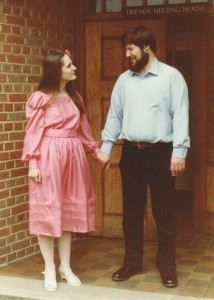 At Yearly Meeting Gathering in York 2009, the Religious Society of Friends decided that marriage should be equally available to same-sex and opposite-sex couples and that we would seek a change in the law to allow us to solemnise all marriages in the same way. I went to York broadly sympathetic to the idea of equal marriage, but expecting that Yearly Meeting would defer any specific decision. Having a whole week together gave us plenty of time to consider the issue. We had were lots of special interest groups that looked at specific aspects, for instance, I attended one that just considered what word we should use – marriage, partnership, something else – and the various meanings that are attached to these words. Another day several couples spoke a full hall of people about their experiences of being in a long-term, loving, sexual relationships (whether or not they had been able to ‘marry’). Among other things, this helped us to understand that having and bringing up children need not be an issue. Some same-sex couples are bringing up children, some opposite-sex couples do not have children, through choice, infertility, or age. My lasting memory of this session is watching Alistair stand behind his partner Sean who was speaking to the assembly. Alistair was a strong, silent support. Nearby, but not dominating. I thought ‘that is exactly what I want in a marriage partner’ and then I thought ‘that is exactly what I have in my marriage partner’. At that point I was convinced that the gender of the partners was not important. What matters is the quality of the relationship. The Yearly Meeting was also greatly helped by the presence and contribution of the young people, who, on one occasion, simply didn’t leave the meeting as planned during a shuffle break, but just stayed until the decision was made. As well as deciding that these relationships were of equal standing and so should be treated equally, Yearly Meeting decided to use the word ‘marriage’ because it is the only available word that expresses the spiritual dimension of the relationship, which is the aspect we particularly want to celebrate. And to recognise that, in George Fox’s words: ‘…for we marry none- it is the Lord’s work, and we are but witnesses.’ QF&P 16.01