I’ve probably always been a Universalist, though I wouldn’t always have recognised the term. My mother is a Universalist, though she may not use that word, and has been since a teacher, reluctant to teach conventional RE, taught ‘comparative religion’ and instilled a respect for all faiths in at least one of her pupils.

I’d better clarify what I mean by ‘Universalist’, since there are different understandings of the term. I go along with the Quaker Universalist Group  in saying:

‘… our understanding [is] that spiritual awareness is accessible to everyone of any religion and none and that no one person and no one faith has the final revelation or monopoly of truth. We acknowledge that such awareness may be expressed in many different ways. We delight in this diversity …’

I always felt that this was self-evident from a Quaker perspective, especially given the ‘Advices and Queries‘ which say such things as ‘Remember the importance of the Bible, the writings of Friends and all writings which reveal the ways of God.’ and ‘Are you open to new light, from whatever source it my come?’ 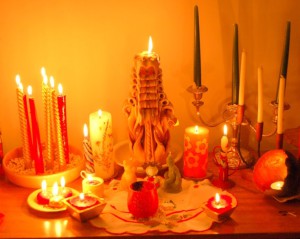 I was a bit surprised to discover, about five years ago, quite how threatened Christo-centric Friends felt by Universalist Friends. I have, as I say, always been a Universalist, but much of the time I would also have identified as Christian – while being increasingly wary of the different ways that term can be understood. I still struggle to actually understand, in other than a theoretical way, how being Christian conflicts with being Universalist. When people ask me ‘How can you be a Buddhist AND a Quaker?’ I can see where the question is coming from. And, to be fair, I ask myself the same question sometimes. Though it is the rituals that I encounter as a Buddhist that trouble me more than the apparent atheism. I suppose that to Christians who believe that Jesus Christ is ‘THE Way, THE Truth and THE Life’ John 14:6 there is a conflict. I’ve always gone more with ‘in my Father’s house there are many mansions’ John 14:2.

Over the years I have had a few experiences that confirmed, for me, that ‘ spiritual awareness is accessible to everyone of any religion’. Chanting at a sufi gathering, chanting with Nichiren Buddhists, singing traditional Jewish melodies, I have experienced that same stillness that I find in meeting for worship, that same sense of Presence. Listening to Thich Nhat Hahn, studying Jewish texts, reading Rumi’s poetry, I sometimes have those moments of insight that also come to me through spoken ministry. 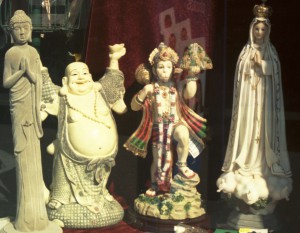 The God(dess) I believe in loves everybody and would not exclude anybody just because they had never read a particular holy book, learnt about a particular teacher, followed a particular guru, or participated in a particular ritual.

My (Quaker) understanding is that everybody, yes everybody, can, if they wish, have direct access to that love, and direct communication with that God, whether they perceive that Divinity to be within themselves and others, or something external, or both, and whatever they may or may not name that unnameable Love.