I’ve been attending mornings of mindfulness with the Heart of London Sangha since last April. My attendance is erratic, certainly not weekly, but at least once a month. My motivation for attending has been to follow Thay’s* advice about the importance of belonging to a sangha, to see if this sangha is the right place for me at this time, but also to find out about how a Community of Interbeing sangha works and is run with a view to possibly starting a sangha nearer to home. There was also (I have to admit) the added incentive of the opportunity to meet up with a friend who has also been attending these meetings. 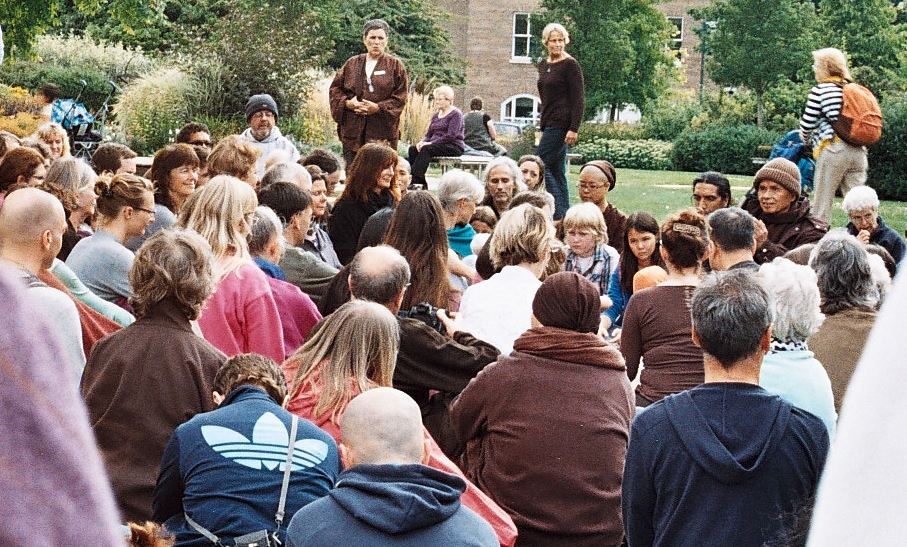 One of the features of Heart of London sangha meetings is the centrepiece, something I hadn’t encountered before. I don’t know why things are done this way, and I haven’t yet asked questions. What follows are my personal observations and reactions.

This sangha usually meets in a Quaker meeting house, which is quite common, and a comfortable space for me to be in. The chairs are cleared from the centre of the room and mats and cushions arranged around a central space. There is no obligation to sit on the floor (though probably about half of us choose to) and plenty of chairs are left around the mats.

In the centre of the central space is the centrepiece. It usually consists of a rectangle of coloured cloth on which are arranged various objects, usually including a Buddha statue, some natural materials (flowers, stones, leaves), often some nightlights, occasionally small items of food. Sometimes it becomes clear during the course of the morning that the decoration in the centre reflects the theme of the morning, which will also show in the guided meditation and the dharma reading or talk. The centrepiece also features strongly in the sharing session, when those wishing to share are invited to bow to the sangha (who bow in response) and to pick up an object from the centrepiece. While holding the object, the sangha’s attention is devoted to that person, whether they speak or remain silent. This is similar to a practice sometimes called the ‘talking stick’ or ‘magic microphone’, that I have encountered elsewhere, and use extensively when facilitating Quaker groups. My personal choice of ‘talking stick’ is often a pink, cuddly elephant known as Lizzie – although sometimes another object is more appropriate. 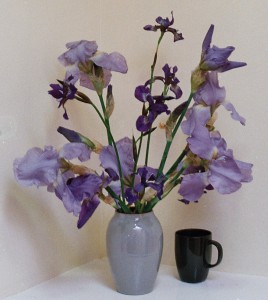 For a Quaker meeting in Britain, where most people will sit on benches or chairs (sitting on the floor isn’t forbidden, but isn’t common), it is usual to have the chairs arranged around a central space in which we put a table. On the table are usually some flowers and some books (usually the Bible and Quaker Faith and Practice). In my home meeting we also put books for children, a water jug and glasses, a collection plate and a printed copy of the notices – things people may want access to, but the table actually ends up quite cluttered. 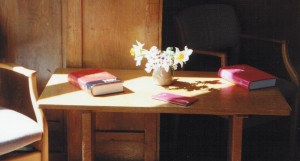 What is the purpose of the ‘centrepiece’ in these contexts?

In the Quaker context I think it is to allow easy access to things we might want during the worship and, especially in the case of the flowers, to help make the room looked ‘lived in’ and inviting. I feel that the flowers are best kept simple, preferably picked from what is readily available,and if that is dead leaves and seed heads, so be it. Our meeting house has a fairly extensive garden, so this is not difficult. Sometimes the ‘centrepiece’ inspires spoken ministry during worship – most commonly what’s known as ‘daffodil ministry’. American Friends generally reject the central table as preventing people seeing others across the room and leave an empty space in the centre.

In the Buddhist context, setting the scene and making the room feel welcoming and inviting is also part of the purpose. Helping us to centre down into meditation may be another purpose, and I do find this can be helpful, especially if the centrepiece is kept simple. If it reflects the theme of the day’s teaching in a different, non-verbal, way this can also be helpful.

At home I don’t have a specific place for meditation practice, I just move a small table into a space, light an incense stick, perhaps add a Buddha statue, or some flowers, and sit in front of that on my cushion. I find this helpful in delineating some time and space for meditation. The burning incense stick helps to indicate the passage of time, encouraging me to persist for long enough, but not to sit all day (and some days I happily would!). If I feel more inclined to a Quaker ‘quiet time’ than a Buddhist meditation, I would usually sit on a chair, and on my table light a candle (I shouldn’t leave it burning unattended, so that helps to keep me sat), possibly adding a suitable book or some flowers (if they are readily to hand). Sometimes having something simple to focus my eyes on is helpful, it can even act as visual mantra to which I can keep returning my attention, when it wanders (as it inevitably will). Again, it’s primarily about setting aside this space and time for the purpose. Clearly the ‘centrepiece’ at the morning of mindfulness is also, in part, about this setting aside time and space for the important activity of meditating together which is significant in bringing the sangha together.

* Thay (Vietnamese for teacher) is the name commonly used among his followers for Thich Nhat Hahn, and also the name he calls himself by when he speaks.