Mantra – an aid to meditation, usually a word or phrase. It is repeated by the meditator, silently, or sometimes, aloud. It serves to focus the attention and to bring back the attention when it wanders off following some thought or other (and I expect anyone who has attempted meditation recognises that situation).

The idea is used by many different schools of meditation, secular as well as religious. Well known Buddhist mantras include ‘om mani padme hum’, ‘gate, gate, paragate’, ‘namo kuan sin yin pusa’. Christians may use ‘maranatha’, ‘be still and know that I am God’, or a meaningful word such as ‘Jesus’, ‘Lord’, ‘Christ’. Sufi Muslims use the names of Allah including ‘Allah akbar’. Then there is the Hindu ‘Hare Krishna’. Transcendental meditation offers each practitioner a personal mantra (though I’ve heard there are actually only a few different ones).

I use various of these at different times. To put it bluntly – I have fads for different ones. My overall favourite is ‘be still and know that I am God’, which I have learnt to be particularly effective if each repetition omits one more word from the end.

But I also view what look like other practises as variations of mantra meditation. Mindfulness of breathing uses the breath in place of the verbal mantra. Walking meditation uses my footsteps (and my breath too, if I can mange both at once).

Once I was in a group that tried knitting meditation. Each stitch is like the repetition of a mantra. (It needs to be fairly straight forward knitting.) We liked it so much that we did it every day of the week we were together. A lot of blanket squares were knitted. Someone who didn’t knit brought his embroidery along. That worked well too.

Another mantra I’ve discovered is the visual ‘looking at the flowers’ mantra. While many people prefer to meditate with their eyes closed, it isn’t always appropriate (for the year or so that I took a medication that made me a bit dizzy, keeping my eyes closed, even when sat firmly still on my cushion, accentuated the dizziness and was most uncomfortable), but open eyes can wander very easily, taking the attention with them. Focussing the eyes on something such as the flowers on the table in meeting for worship, or on the shrine, or in the centrepiece, can be a good way of bringing the attention back. 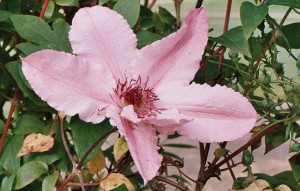 So what is my current mantra fad? Fruit-picking, especially blackcurrants. Like knitting there are lots of opportunities to bring the attention back. And, also like knitting, it’s gently productive.

What is your preference? What works for you?

1 thought on “M is for Mantra”