Hang on, I thought this was a Quaker blog, what’s Zen doing here?

Well, let me attempt to explain. As you might have picked up reading this blog (assuming you have been), I’m interested in learning about other faith traditions, especially in understanding what it feels like to be part of the tradition, rather than just book learning (though that has its place).

In January 2006 I went to Charney Manor for a weekend retreat entitled ‘Exploring Stillness (Quakers and Buddhists)’, which became very much a turning point for me, not least because I came away with the burning question ‘what ways into stillness work for you?’.

I identified several possibilities that I felt warranted following up, among them circle dancing and mindful walking. Over a period of time I availed myself of opportunities to learn more about these various possibilities. This led to my going to Claridge House for the first time (which led on to other things, but that is another strand in my story). It also led, via the poetry of Rumi, to my taking Chi Gong classes for several years (but that too is part of another strand). And, eventually, it led to my joining a ‘Being Peace’ retreat at Woodbrooke in December 2009, as my final short course on Equipping for Ministry.

‘Being Peace’ was a retreat practising in the tradition of Zen master Thich Nhat Hahn. I really liked the sitting meditation, both guided and silent, and, even more, I liked the walking meditation. I wanted to learn more. I took a follow up weekend at Woodbrooke in March 2010 and booked for the retreat that Thich Nhat Hahn was to lead at Nottingham the following August. 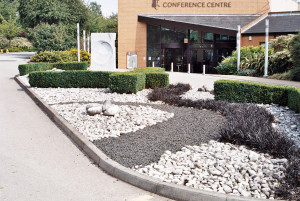 Nottingham was initially a bit of a culture shock. I hadn’t taken in quite what it would feel like to be part of such a large group of people who did, actually, all file in for their first meal together in silence, and sat and ate it, in silence. It did seem very strange not to greet people, not to swap names, not to share something of about our journeys or talk about the weather. Quite disconcerting.

Later we all assembled in the huge hall of the conference centre, renamed the Dharma Hall for the duration of our retreat. I don’t remember much of what was said that evening, except that it included fairly routine information about what would happen when. What I do remember, absolutely distinctly, is hearing Thich Nhat Hahn say ‘the Kingdom of Heaven is Here and Now’. My immediate response was that this was what I’d believed for many years, if this was what he was teaching, I’d follow.

Another evening we had a presentation about the ‘Five mindfulness trainings’ and five people spoke about how receiving the trainings had affected their lives. I’d never thought of formally receiving the trainings before, but I came out of that session thinking that the trainings, although expressed rather differently, ask exactly the same behavioural changes that Advices and Queries do. Perhaps I could receive them. Despite my daughter’s best efforts to dissuade me, the final morning of the retreat found me prostrating myself, along with 100+ other applicants, in a very unquakerly ceremony to formally receive the five mindfulness trainings. It felt to me that I was making a very strong commitment to this path, although I was equally clear that I was in no way ceasing to be a Quaker.

So it is very much from my Quaker home, and by following what I have understood to be ‘the promptings of love and truth’, that I have come to be following a Zen path alongside my Quaker one. This is particularly pertinent at this concluding stage of my Quaker alphabet, not only because Zen begins with Z (though obviously that helps a lot), but because I propose to attempt a Buddhist alphabet next year. It will I expect be very much a Quaker Buddhist alphabet, because that’s where I’m coming from, but I hope it will be a good continuation of the spiritual discipline that writing the Quaker alphabet has been.