I am about seven, certainly no older, walking home from school alone. I can still picture the road from the infant school in The Rutts, Bushey Heath. As I walk I am thinking about what the Sunday School teacher has been telling us:

‘Jesus is with you all the time. He is right there, holding your hand.’

I’m trying to understand how this can be: ‘He must have an awful lot of hands’ I reason ‘to have one for each child here, for each child in the whole world.’ I have a picture in my mind of a being with many hands ‘like an octopus (which I’ve heard of but haven’t seen), but more so’. This made sense to me and remained with me as a picture of God reaching out to everyone. I never related to the old man in the clouds, though I couldn’t say where my ‘octopus’ was located!

Along with this I had a sense of what the teacher was trying to tell us, that He was always close by, always ready to help, always loving each and every one of us.

Many years later I came across a picture of the Tibetan Bodhisattva ‘Chenrezig of the Thousand Arms’. I recognised that image. That is as close as I can get to what my seven year old self would have drawn that day walking home from school. That is the loving Jesus of my childhood. 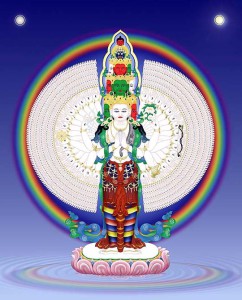 I have since learnt a bit more about Chenrezig of the Thousand Arms. Chenrezig is the Tibetan name for the bodhisattva Avalokiteśvara (sanskrit), also known by the chinese name Quanyin.

A boddhisattva is a being who has achieved enlightenment, but vowed not to enter nirvana until all beings have achieved enlightenment. A bodhisattva is often held to be able to manifest in any appropriate form in order to help anyone who needs help. Avalokiteśvara is known as the boddhisatva of compassion and manifests in both male and female forms.

There is a story that Avalokiteśvara struggled so hard to understand the needs of so many unhappy beings that his head split into eleven pieces, so he was given eleven heads to hear the cries of the suffering beings. Trying to respond to all the cries he could then hear and understand, his two arms broke into many pieces. So he was given a thousand arms with which to help. I am struck by the way this story reflects my ‘childish’ reasoning that Jesus must have many arms to care for all the children in the world. These days I my understanding is the the hands, heads and arms that God has in this world are mine and yours, many thousands of us. It is for us to hear, understand and respond to the cries of the suffering beings while recognising that we, too, are suffering beings.

1 thought on “A is for Avalokiteśvara”