‘Wow, that was quite a journey!’ commented the ticket inspector as she checked my ticket just as we approached Watford Junction, my return destination.

‘It was well worth it’ I replied.

So what made it worthwhile?

travelling to Glasgow on the train

across window, barrier me

from world I pass through

I like that isolation on the train. I read or sew or knit and watch the world pass by. It’s a transition from my everyday life to where I’ll be and what I’ll do next.

My journey involved several changes. As we approached one station my bag was just too heavy for me and I crumpled to the floor of the carriage. I was not hurt (just felt daft) and my fellow passengers were brilliant about lifting my backpack and helping me up. Beyond Lancaster the scenery got a lot more interesting and the rain got a lot less. I looked out of the window a lot more.

Michael and Tim met me at Glasgow Central and I felt welcomed and cared for. Having arrived at Michael’s home, Tim and I spent an hour or so finalising plans for the morrow, being prepared for several possibilities so that participants would have something of the sense of choice that is an important part of Becoming Friends. We were there to deliver a Woodbrooke-on-the-Road workshop ‘Living and Learning with Quakers’, drawing on our experience of ‘Becoming Friends’.

Then we could all relax over a delicious vegetable pie prepared by Zem and talk about everything and nothing, putting the Religious Society of Friends to rights, clearing our clutter and getting to know one another better, interspersed with bird-watching.

Glasgow Meeting House had been flooded due to damage from the demolition site next door. I’d had difficulty imagining this, but it was clear when I saw the old house converted for Quaker use and the huge ‘concrete monstrosity’ being demolished. So we were using rooms at Renfield St Stephens nearby.

There was a good feeling in the room as about 30 people gradually gathered and were soon chatting over refreshments before we began the formal sessions with a period of worship and introductions. Thinking about our own first time at meeting and how we learnt about Quakers and sharing this with the person sat beside us soon had everyone involved, remembering and sharing.

A more intensive listening exercise followed when people were invited to share an experience of spiritual friendship in their own life both deepened relationships and heightened awareness of the value of being truly listened to. This is a challenging thing to do, but consistently it is the activity that people make most positive comments about on the evaluation forms.

In the afternoon we tried to give a taste of the choices available in the ‘Becoming Friends’ course. Participants could choose which of two units to look at. I facilitated one group and Tim the other. In my group we did tasters of all the stages – distinctives, discovery, deepening – changing groups every time. It was rather rushed, but I hope gave an overview. Tim’s group settled on an activity that interested them and spent the whole time on that. To anyone doing the course either approach, or some middle way is equally possible.

In the concluding session we checked to see if we’ve covered the hopes for the day that people put on post-its when they arrived. All except “to learn what the ‘central office’ of Quakers is saying” and “the answers to all my questions even those I have not yet formed!”.

Next day I was able to stay long enough to worship with Glasgow Friends. It’s always a delight to me to visit other meetings for worship. 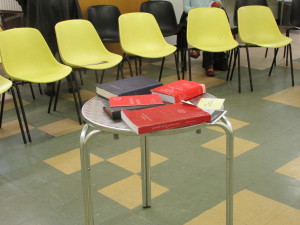 centred, grounds us for action.

But what will I do?

Rather a dash to get to Glasgow Central in time for my rail replacement bus, and there was nowhere to park. Michael ended up having to dump me rather unceremoniously on the pavement somewhere in the vicinity of the station. But that’s fine.

I just went with the bus ride, and the scenery. I’d be back in the town soon enough.

Beyond Carlisle it was back to train travel. The train was far busier than Friday’s, with passengers having to stand. Everyone was friendly and we made the best use of the seats that were available. It felt good to be sharing the journey.

And then I was back to Watford, with the slightly surprised London Midland ticket inspector.